I recently learned of a book for young readers that combines three of my passions: poetry, history, and social justice. THE TRAVELING CAMERA: LEWIS HINE AND THE FIGHT TO END CHILD LABOR (Getty Publications, 2021) balances these three elements beautifully, along with striking images in both Hine’s photographs and illustrations by Michael Garland. I was lucky enough to interview author Alexandra S.D. Hinrichs about her process of writing this biography in verse. 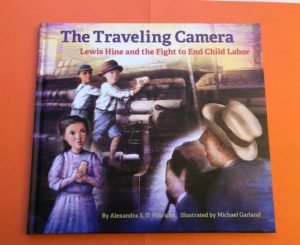 Alex used lots of primary sources in her research, as well as secondary. Through a book of Lewis Hine’s letters, photo captions, and articles, she immersed herself in his words, his language, his ways of expressing what he had seen in factories, fields, and other settings where children toiled. Hine was a prolific writer fighting to end child labor; Alex also had access to the articles he penned for the Child Labor Bulletin and other newspapers.

Alex uses Hine’s striking images and poetic language to great effect in THE TRAVELING CAMERA. Hine had to make his way into factories and other settings in order to investigate and photograph. He would tell factory managers that he was photographing broken equipment, or a salesman, when in fact he was documenting the children who were working in dangerous conditions at young ages. He used the buttons on his coat to estimate the height of children, describing a child in a factory who was “three buttons tall.” These are the details that Alex employs to great impact in her poetic text.

“Poetry is my first go-to when I’m writing. It’s a natural starting point for me,” Alex explains. “My first full draft was in free verse. I do remember talking to my editor at the outline stage and she encouraged me to play, pretty much gave me free rein to be creative and think outside of the box for how to tell Hine’s story.”

Hine himself was a poetic writer, and his language shines throughout the text of THE TRAVELING CAMERA. A man who was slight in stature, Hine wrote that the clunky large camera was “a heavy load/for a featherweight/ to tote.” He was passionate about ending the injustice of child labor and wanting to humanize the children who were working in factories and fields, “Because the human spirit/ is the big thing/ after all.” 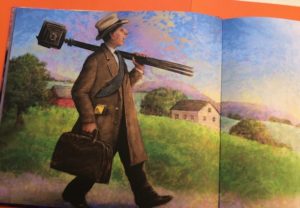 Because she had access to so much of Hine’s writing, Alex decided to weave his words into her verse. Italics mark the words of Hine in the text, and it’s a seamless way to give us a sense of Hine’s voice. I think this is a brilliant decision, and it’s noted in the backmatter.

Alex offers a peek into her process: “My biggest focus was Hine’s voice– how to capture his voice, obviously sometimes using his exact words, and then staying true to his voice even when they were my words. Relatedly, this was my first time writing poetry in a character’s voice and in a different time period. To help with both of these, I made a file of quotes and language where I just made a big list of words, phrases, and sentences he used that seemed distinct to him and/or the time period. As I revised if there were places I wanted to make his voice come through more, I turned to that list.”

I appreciate Alex offering us a peek into her process. Her techniques and craft decisions have much to offer poets and biographers. Be sure to get your hands on this beautiful book– biographies in verse are rare, and this one is especially wonderful. If you want to order a personalized copy, check here. (Be sure to specify how you’d like the book to be signed.)

On Fridays, I love taking part in Poetry Friday when I can, where writers share resources about children’s poetry. This week, Matt Forrest Esenwine hosts the Poetry Friday Roundup today at his blog Radio, Rhythm & Rhyme. Check out the celebration of poetry there today!